The compilation film will open on January 6. 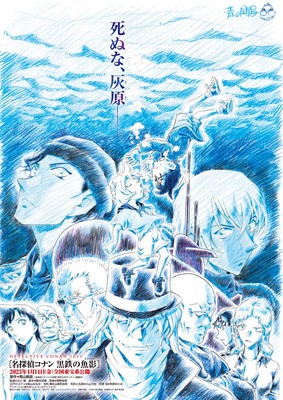 The Detective Conan: Kurogane no Submarine film will open in Japan on April 14, 2023.

The film’s story takes place on the Hachijō-jima island south of central Tokyo. Many engineers from around the world gather to witness the launch of a new system that connects all law enforcement camera systems around the world and enables facial recognition worldwide. Conan also heads there with an invitation from Sonoko. He receives a message from Subaru Okiya, who says that a Europol agent has been murdered in Germany by the Black Organization’s Gin. Perturbed, Conan tours the new facility, just in time for the Black Organization to kidnap a female engineer, seeking a piece of important data in her USB drive.

TOHO had teased the film in November with a video focusing on the character Ai Haibara. The film will also feature Amuro, Akai, and members from the Black Organization. TOHO had teased that the film would open around the Golden Week of spring holidays in Japan, which will run from April 29 through May 5.

The film earned a total of 9,682,314,250 yen (about US$66 million) in Japan after a Halloween special re-screening starting in late October, making it the highest-earning anime film in the Detective Conan franchise.

Pokemon Scarlet And Violet: How To Evolve Gimmighoul Into Gholdengo