Genius Invocation is a card game that you can play in Genshin Impact. Think of it as something akin to others you’ve seen, such as Hearthstone, Magic: The Gathering, and so on. Of course, it’s got its own theme going based on what you’ve come to learn in Teyvat. Here’s our Genshin Impact Genius Invocation TCG card game guide to help you with the mechanics.

Note: For more information about the game, check out our Genshin Impact guides and features hub.

You’ll receive a quest for the Genius Invocation TCG in Genshin Impact. Simply head to Mondstadt and you’ll spot Sucrose in front of the alchemist vendor. From there, you’re directed to the Cat’s Tail. The bar is now open and, inside, you’ll meet Diona, as well as Prince the Cat. Pay attention to the tutorial since you’ll learn the basics therein.

Above, you’ll see a layout of the board/screen where you’ll be playing. Here’s the gist: 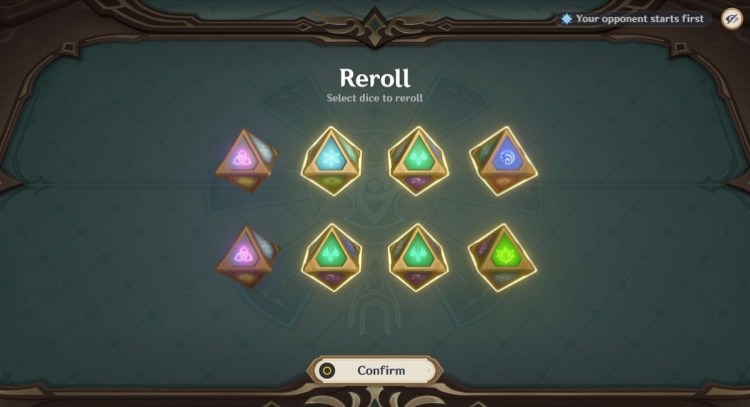 Before each phase, both players will roll 8x dice. You’ll see how many are of a particular element/color. For those that you don’t need, you can simply click on them and press the reroll option. You can do this only once per phase. After this, the dice will appear in the right-hand side of your screen.

If you don’t have the right elemental dice and you don’t want to use Omnis, you can opt to do some Elemental Tuning. This allows you to discard an action card in the bottom of your screen by dragging it to the right of the pile. In turn, you can pick a die of any element to convert it to your character’s type.

Moreover, you can also switch to another character. This is done by clicking on either of the two backups, and then paying the cost in elemental dice (usually one). This prevents your original character from taking too much damage, and it also presents additional setups for elemental reactions. 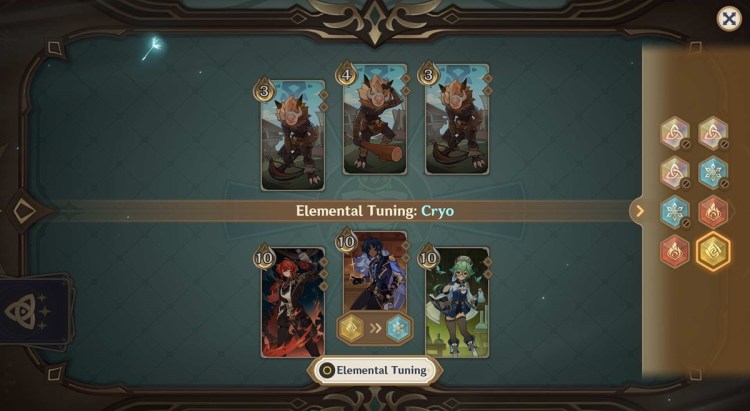 Speaking of action cards, five will be chosen at random once the match starts. They have different effects, such as healing a character, increasing damage, lowering the casting cost, providing other cards with energy, and more. 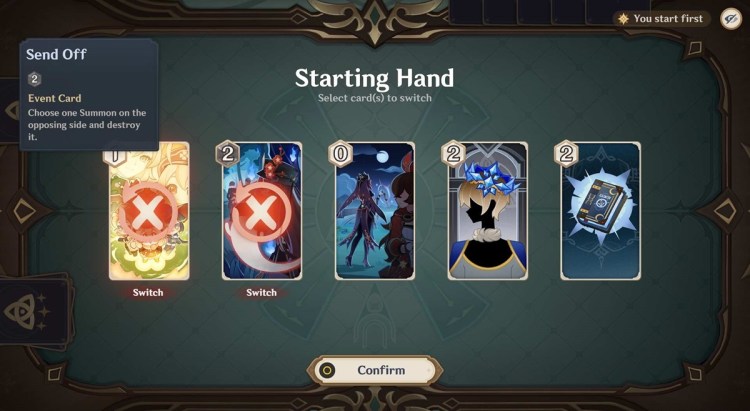 Your goal in Genshin Impact‘s Genius Invocation TCG is to defeat your opponent’s character cards. This means maximizing the effectiveness of each skill/element, and switching around characters when necessary. For instance, if you hit a target with Cryo, you can switch to a Pyro option to deal extra damage with Melt. Alternatively, you can try Anemo to generate a Swirl reaction.

One basic technique that you can try right now is to use Kaeya until he can pop his burst (i.e., 4x Cryo and 2x energy). While active, it will deal +2 damage to the opponent’s active character whenever you swap to a new one. This means you can cast the burst, and then spend 1x die for each character swap. 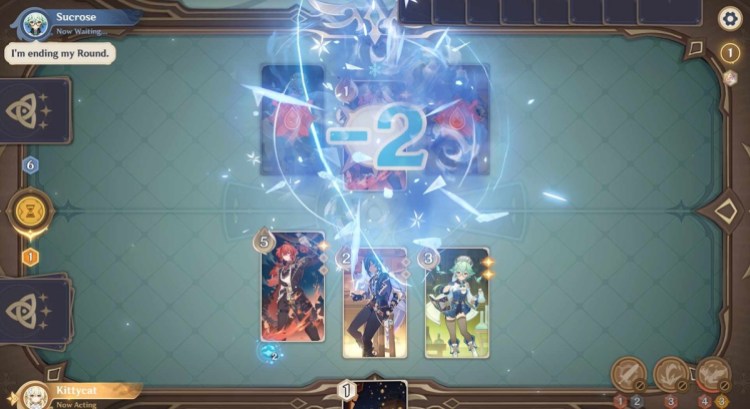 After the tutorial matches, you’ll become a full-fledged Genius Invocation player in Genshin Impact. You’ll receive the Casket of Tomes, an object that you can access via the Gadgets inventory menu. Here, you’ll see the “Deck” option. You can build your ideal deck, which, again, should be comprised of three character cards and 30 action cards. 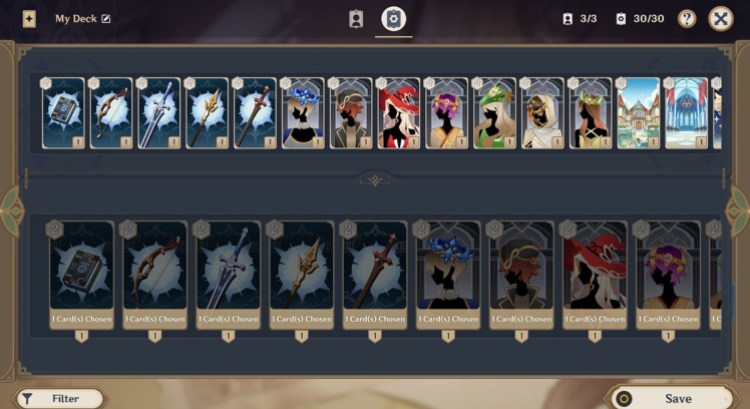 Search for Player and Challenges

The other Casket of Tomes function is the “Search for Player” command. This causes icons to pop up on the world map, each one representing an NPC that you can compete against. There are two types of battles:

Each NPC also has their own challenges and rewards. For example, you need to beat Timmie within six rounds, and with less than two of your characters defeated. If you manage to meet these requirements, you’ll receive Timmie’s action card, which summons a pigeon that gives an Omni Dice later in the match. 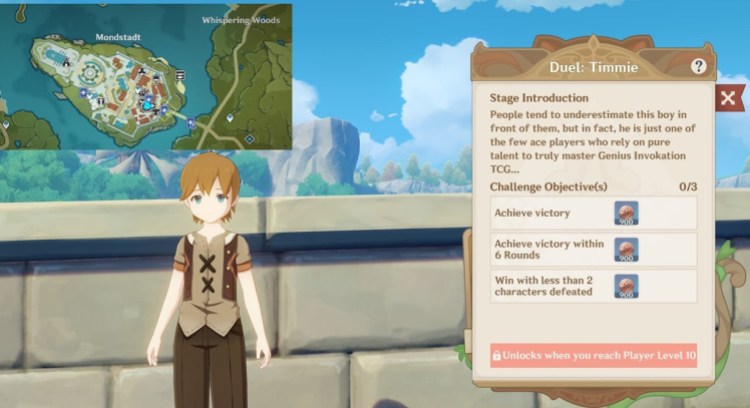 Prince the Cat Rewards and Challenge Board

Your victories in Genshin Impact‘s Genius Invocation TCG will also net you a currency that can be used to purchase items from Prince the Cat. These include dynamic skins (i.e., animated portraits) and special cardbacks. 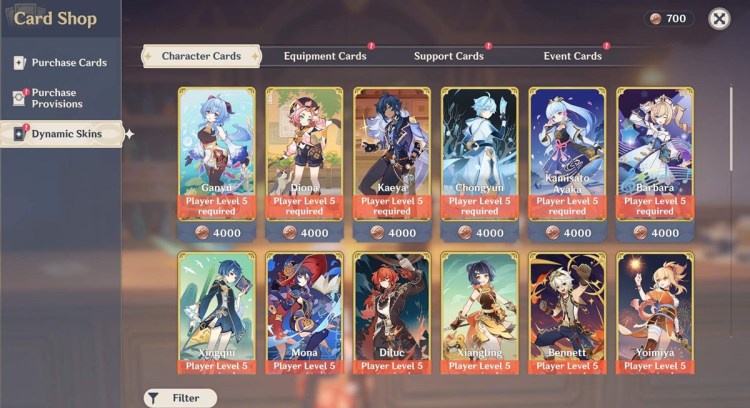 Moreover, you may also try a weekly challenge against another NPC. You can do this by interacting with the bulletin board in the Cat’s Tail Tavern.

And, last but not least, the same bulletin board has a tab that allows you to challenge your friends. 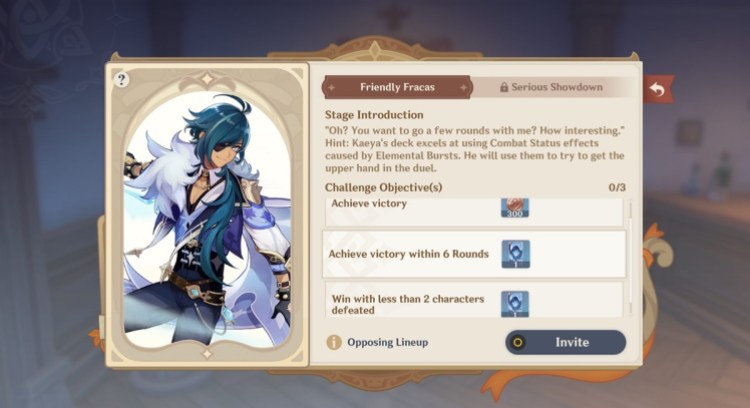 Genshin Impact is available via its official website. For more information, check out our guides and features hub.

Microsoft reaches 10-year deal with Nintendo for Call of Duty

The Day Before Devs Say Delay Was Planned Before Trademark Dispute

When Does Redfall Come Out?

Microsoft reaches 10-year deal with Nintendo for Call of Duty